Praaaaiiisee the Lord!! It’s resurrection season! Jesus is alive!! There’s public holiday today and on Monday!! No classes till Tuesday!! Can I get an hallelujah?

How have I been? I’ve been okay, really. School is just so stressful. Even my smile looks stressed. Yes. Look at the picture again.

I think I spaced out these past two weeks ‘cos I have about 5 assignments to complete and I just wrote a test but school won’t keep me from publishing here.

Back to serious matters 😪😌 Winter is finally here!! (Cue GOT fans screaming in the background 😂) I’m sure everyone knows about Game of Thrones now because of all the hype especially on the 14th of April when the first episode of the final season officially aired. Have you seen the ratings of this series? I’m in awe!

So, I’m unashamedly one of the GOT fans. You should hear me singing the theme song with my angelic voice. 😚 My course mates can testify. 😌 Almost everyone in the world is watching GOT. Emphasis on almost because there are people like this: 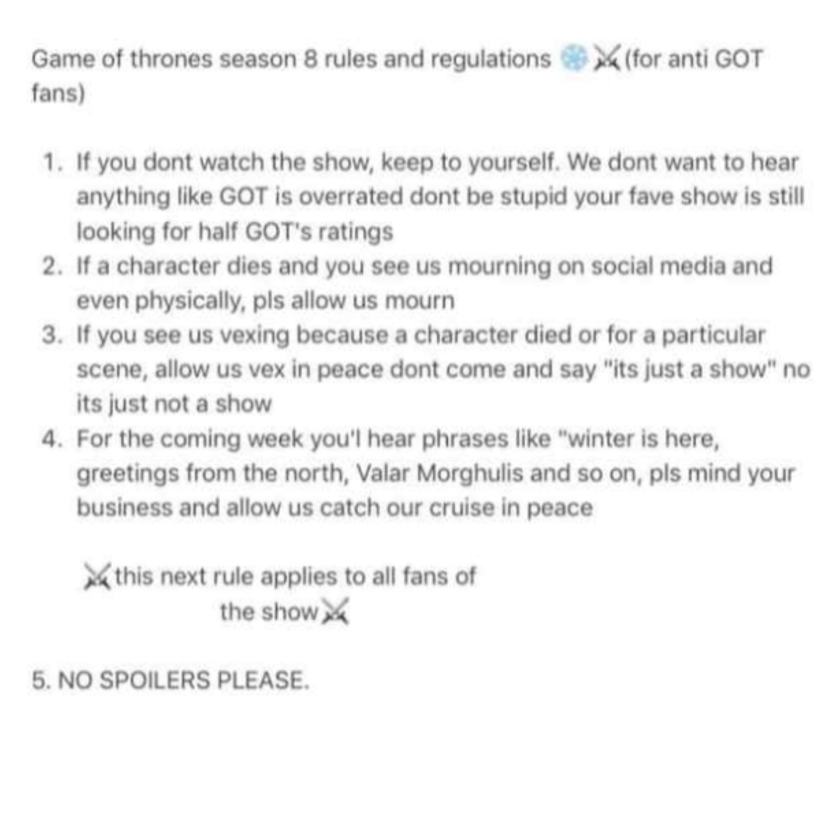 And then we have: 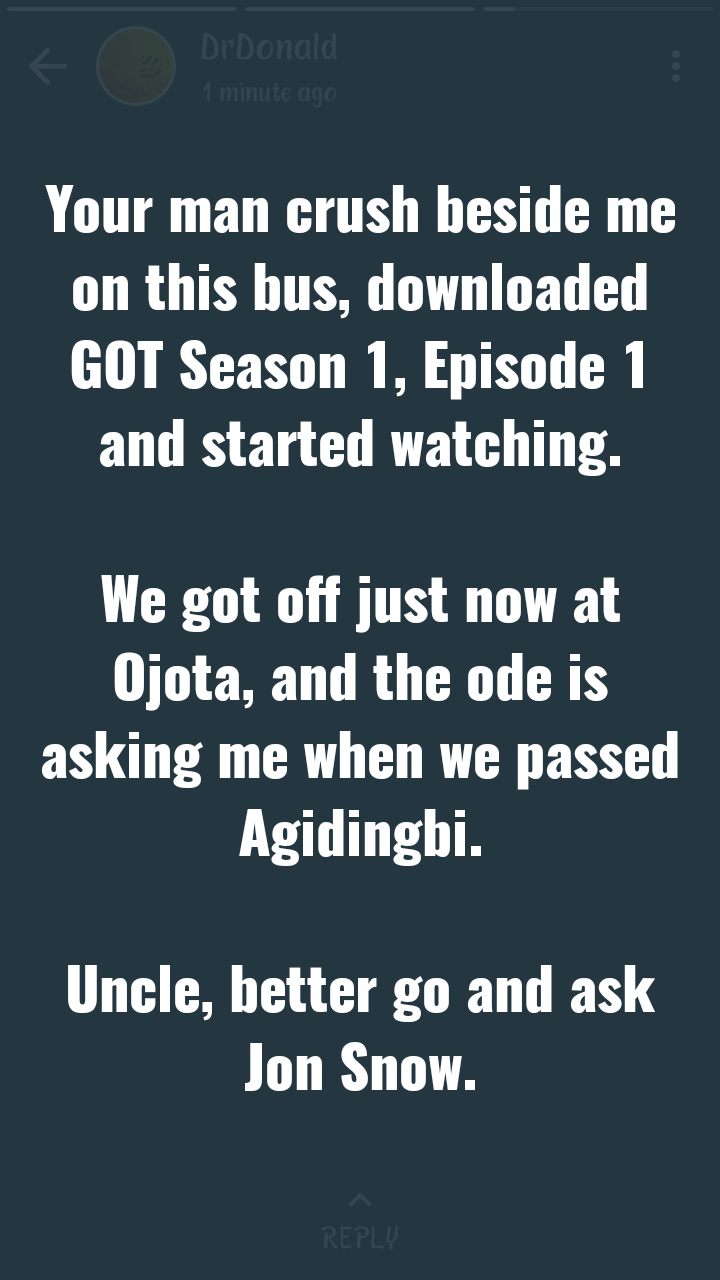 This was my cousin’s status update by the way. Apparently, The Dr Donald is not a fan. This was one of his many hate posts but who cares right? 😂

I started watching the series in my 100 level, second semester. It’s captivating and suspense filled. To me, it’s worth the hype and I have my favorite characters.

My best character till date is Arya Stark (Maisie Williams). I don’t know why but I feel like I can relate to her on so many levels because she grew stronger with each circumstance she was surrounded by.

My second favorite character is Daenerys Targaryen (Emilia Clarke) the unburnt, Khaleesi and mother of dragons!! There was a point when I started watching GOT that I’d skip the other scenes and watch her scene first before properly watching an episode. She is strong, beautiful and ooh so intimidating.. Lol. I love it when she says Dracarys. Honestly, we need her dragons for the annoying people in Nigeria. Here’s our queen:

Last but not the least is Jon Snow (Kit Harrington), my boo. Argue with your keyboard but we have something special. So, Oga is so nice and he puts the interests of others before him. His selflessness is just something to be reckoned with. He gave up his crown for a cause. So noble. But with this secret that we found out in episode 1 of season 8, who knows what will happen next? So, Jon Snow in all his finesse:

These are my top three characters in GOT and like I said, it’s worth the hype.

Last Sunday, my roommate wanted to be in on the GOT craziness so we downloaded a summary here. Mind you, it doesn’t give you total knowledge of the 7 seasons. Like, how can you even summarize 7 whole seasons in an hour? I know what I went through that day because we’d watch like two minutes and I’d be explaining for about ten but now, Juliet has basic knowledge of GOT and she won’t be floating when we’re having winter discussions 😏

So, I’m anticipating episode 2 of season 8 while still trying to figure out how I’m going to do my assignments because:

I’m just realizing that after all the noise I made at the beginning of my write up about the holidays, I’m going to be doing book work. Sigh. But I’ll probably go watch a movie tomorrow. I deserve a break.

Going off topic, let me just chip in that I’m laughing at Manchester United and I’m hailing Barcelona and Messi (He’s my guy too 😍). Twas a funny match by the way 😂😂

Anyways, I hope your Easter holiday goes great, especially those ones that are traveling. Where are you people even traveling to for just 4 days? that’s another story for another day.

Till next time loves, Happy Easter!

Who are your favorite characters in GOT?

Who are your worst characters in GOT?

Who hasn’t seen GOT at all?

How are you spending Easter?

We Don’t Know What’s Up.

7:21 PM, 16/06/22 Picture this: I’m sitting cross-legged on my bed, cradling my laptop and musing about how I’m a pro at cooking spaghetti – there was spaghetti and fried fish in my plate 10 minutes ago but it’s empty now. “Adulthood Na Scam” by Lade is playing in the background and I’m singing along […]

Notes for my Woman

Dear woman, You are beautiful, you are unique. Love your skin, love your hair, love your body, ‘cos there’s only one you. Listen to your intuition about what is right for you. Take care of yourself because you matter. It is okay to be selfish sometimes. You’re doing fine. You do not need to put […]

The First Time I Traveled to Gombe State: Part 2.

This is a sequel to “The First time I traveled to Gombe State”. You’d understand better if you’ve read the first part 💜. Three hours later, I woke up to sounds of “where is the driver?” He was nowhere to be found! I was confused ‘cos isn’t the driver the one that usually looks for […]