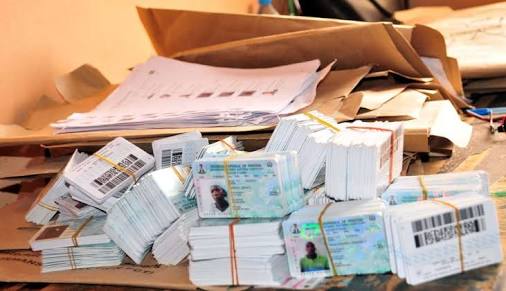 This past week, I decided that I wanted to apply for my Permanent Voter’s Card (PVC) and so, I took permission from work. On that Fateful Wednesday, I set out with my mum to the INEC office on the road to Eliozu in Port Harcourt (Please don’t ask me why my mum was with me. Fine, I’ll tell you. I happen to be one of those people that “don’t know road”. Don’t laugh biko).

When we arrived, we saw the massive turn up for the PVC registration and did what any sharp Nigerian would do – ask questions. We were told that the registration would be done according to where we resided and we were to follow the various officials to those areas to register. Upon hearing our location, we ran after the officials to get directions to the venue for registration. The officials weren’t even patient. They were feeling funky and I’m sure in their minds, they would have been saying “na dem dey rush us”. Well, we were the ones that wanted to get PVC so, we had to comport. We left the INEC office and went to Rumualogu (this place is between Choba and Ozuoba where I reside) as that was the area chosen for the registration.

I had this mindset that it was just me and the other people that followed the officials that would be registered which were approximately 20 – 30. We got there and found about 100 people waiting.At this point, my mum said she was leaving ( I happen to “know road” from there). As a sharp girl, I made inquiries and was told that I had to get a form and fill it before I would be attended to. I also found out that they were attending to people that weren’t able to complete their registration process and get their temporary voters card on the previous days. I began the hustle for the form and succeeded in getting a copy despite the struggle. They almost crushed my small body but I thank God because I came out in one piece unlike someone that was complaining that they cut her slippers and another one that said “my channel O don loss”.

I filled the form and proceeded to start registering. The officials said they wanted to attend to pregnant women and nursing mothers first and suddenly, all the women became pregnant. Some guys also became nursing fathers. I decided to be patient because I believed it would get to my turn until I heard “Indigenes one line, non Indigenes, another line”. That was when I knew that the struggle was real. Next thing I knew, they were screening the non Indigenes by where they lived. If you didn’t reside in Rumualogu, you were asked to leave the line. When it got to my turn, I told the official that I resided in Rumualogu because I had to get this registration over with by hook or by crook. I didn’t anticipate the “What is the name of your landlord” question he threw at me. I just jejely left the line because I was totally blank. I decided to hang around and see if I would be attended to until it got to 4 o’clock and they said they had closed.

I went back home and was lamenting to my mum about their tribalism and their favoritism as I was eating my spaghetti. I told her about everything that happened and how the officials were giving special treatment to some people. I couldn’t understand how I stood on the queue for so long and then someone would just enter, do his or her registration and leave. I remembered one lady that made a statement that “we wey no get government as boyfriend, how we go do na?” It was just plain irritating and annoying. I had wasted my day. My mum later advised me to go back to the INEC office the next day to see if I could register and get the temporary card there.

My name is Oseruona Asak, but I'll let you call me ‘Ruona. I haven't found the perfect words to describe me yet but I’m very passionate about those things that are close to my heart, including sharing my thoughts with you. View All Posts

We Don’t Know What’s Up.

7:21 PM, 16/06/22 Picture this: I’m sitting cross-legged on my bed, cradling my laptop and musing about how I’m a pro at cooking spaghetti – there was spaghetti and fried fish in my plate 10 minutes ago but it’s empty now. “Adulthood Na Scam” by Lade is playing in the background and I’m singing along […]

Notes for my Woman

Dear woman, You are beautiful, you are unique. Love your skin, love your hair, love your body, ‘cos there’s only one you. Listen to your intuition about what is right for you. Take care of yourself because you matter. It is okay to be selfish sometimes. You’re doing fine. You do not need to put […]

The First Time I Traveled to Gombe State: Part 2.

This is a sequel to “The First time I traveled to Gombe State”. You’d understand better if you’ve read the first part 💜. Three hours later, I woke up to sounds of “where is the driver?” He was nowhere to be found! I was confused ‘cos isn’t the driver the one that usually looks for […]